How to Make Toasted Pumpkin Seeds. Don’t throw the “guts” away! Turn those seeds into a delicious and salty snack. An Easy DIY Recipe Tutorial Idea. 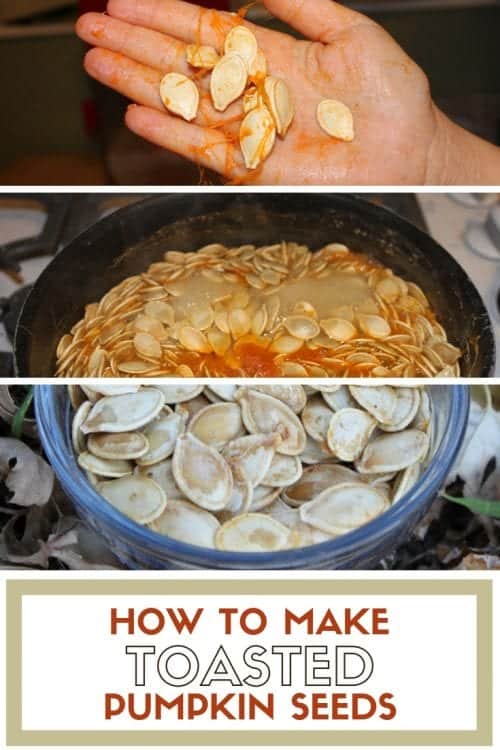 My favorite part of carving pumpkins is eating the toasted pumpkin seeds! Pumpkin seeds are so yummy and this is the only time of year I eat them!

Every year search the Pinterest for a recipe because I can never remember what I made the year before. The recipe I found this year looked easy enough so I thought I would give it a try. This recipe came from Simply Recipes.

How to Make Toasted Pumpkin Seeds

The fun part, at least for the kids, is gutting the pumpkins. I am a girly girl and hate being sticky or slimy and to me the inside of a pumpkin is disgusting! So I just supervise. 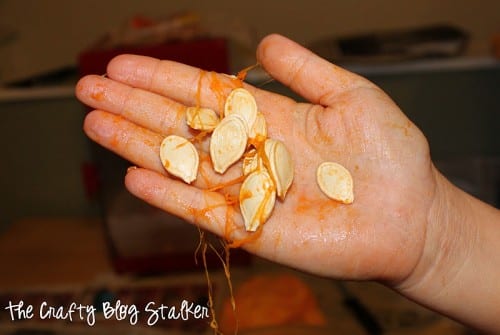 When all the “guts” are removed, put everything into a strainer in the sink. With water running go through the seeds until all those yucky, orange stringy things are gone. It really doesn’t take very long. Maybe 5 minutes.

I have never boiled my seeds before I had always just coated them and put them straight into the oven. I must say I like boiling. It didn’t take that much longer and the salty flavor was more infused then just on the outside.

Never seen boiling pumpkin seeds before? This is what they look like. It’s kind of cool to watch!

After they have boiled for 10 minutes, take them out and strain the water. Pour the seeds onto a cookie sheet that has been lightly coated with olive oil. The recipe says to bake for 10-20 minutes but mine baked for about 30 minutes. I did it in 10-minute increments and stirred the seeds on the sheet between each 10-minutes.

MMMMM! They came out nice and crunchy and not at all chewy. 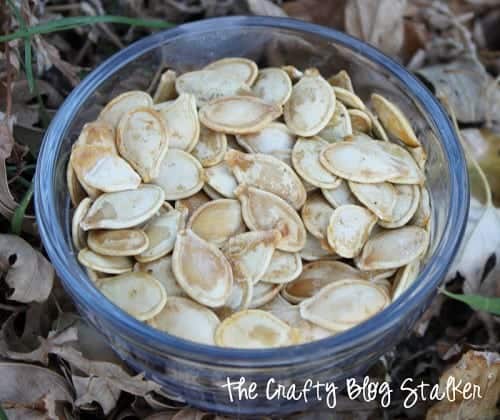 Now that I have blogged this recipe, I will definitely be able to find it next year!

SAVE HOW TO MAKE TOASTED PUMPKIN SEEDS TO YOUR FAVORITE PINTEREST BOARD!

And let’s be friends on Pinterest so you can see all the DIY projects I’m pinning!

By continuing to use the site, you agree to the use of cookies.OK, I Agree Reject Read More
Necessary Always Enabled